If You Want to Be Happy, Try to Make Someone Else Happy 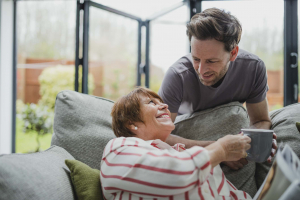 A new study shows that doing kind things for others is an important path to happiness.

When Thomas Jefferson wrote the Declaration of Independence, he assured Americans of their right to life, liberty, and the pursuit of happiness. This idea seems to lead many Americans to chase after new gadgets and hedonistic pleasures. But what if that approach is wrong? What if happiness comes from aiming to make others happy, instead of doing nice things for yourself?

In the experiment, college students reported on their happiness and on their sense of autonomy, competence, and connection to others—all what researchers consider “basic psychological needs” for well-being. Then they were randomly tasked to do something to either make themselves happier, make another person happier, or socialize. (Assigning one group to socialize helped determine if seeking happiness for another had an effect above and beyond simply being in someone’s presence.)That is exactly what a recent study found.

Later that day, after doing their tasks, participants reported what they did, and then filled out their happiness and needs questionnaires again. Those who’d done something to make another person feel better were much happier themselves than participants in the other groups, and their greater happiness was tied to a stronger feeling of connection to that person.

This finding was not too surprising to lead researcher Milla Titova, who says that it fits in with prior research on happiness that found giving to others makes you happier than giving to yourself—and that pursuing happiness directly for yourself sometimes backfires.

“Making others happy is more meaningful for people than just socializing with them or doing something to improve our own happiness,” she says. “When we aim to make others happier, we feel connected to them—our relatedness needs are better met—which is important for us.”

In another part of the study, she and her colleague tried to rule out the possibility that making someone else happier makes you happier because of how emotions spread between people, which is known as the contagion effect. To do this, they repeated their experiment, but this time asked participants to identify the recipient of their kindness and to say how much happier that person appeared to be. Then, they contacted the recipient and measured their actual happiness levels.

The researchers found that a recipient’s happiness level did not seem to be related to the increased happiness of the person trying to make them happy, which suggests something beyond emotion contagion is going on. However, if the participant perceived that their efforts made a difference in another’s happiness, that made them happier.

“If we think another person is feeling pretty good, that’s enough for us to feel pretty good ourselves,” says Titova. “We’re just not always accurate about assessing other people’s feelings.”

She and her colleague also looked at how this effect might play out between strangers. People parked on a city street were approached by researchers and given two quarters for filling out surveys about their well-being. In some cases, they were simply given the quarters to keep or were given the quarters to feed their own meter before filling out the surveys. In other cases, they were told to feed another person’s meter, with some being asked to leave a note on the dashboard of the stranger’s car explaining what they’d done.

Titova thinks this makes sense, given that making someone else happier makes us happier through increasing our relatedness to them. But it could also be that people like getting credit for a good deed, too—or that the note is actually another act of kindness, augmenting connection further.

Whatever the case, it appears that doing something kind for anyone is better for our happiness than getting something for ourselves.

“It doesn’t require you know the person you’re trying to make happy, nor does it require an actual physical interaction with that person,” she says. “It still works—even with a stranger.”

This is a preliminary study, mostly done with a limited population, and Titova cautions against applying the finding to other cultural contexts. This is wise, as studies have found not all happiness practices translate to other cultures.

Still, they do suggest that focusing on making others happy may be a key to happiness worth considering.

“It’s counterintuitive for some people, but if you’re not having the best day, you should think about doing something nice for your significant other or your roommates instead of concentrating on yourself,” she says. “That may not be what comes to mind naturally, but it’s probably more effective.”

If You Want to Be Happy, Try to Make Someone Else Happy